A super cool chocolate for super cool kids – Biorela® Choco Multi Kids – has received the prestigious international award for its great taste that kids adore and now we know why! This unique children’s multivitamin containing probiotic in a chocolate form that has already delighted children around the world met the strict criteria of a jury composed of more than 200 most respected chefs from all over Europe and won the Superior Taste Award, the award given by the International Taste Institute in Brussels. 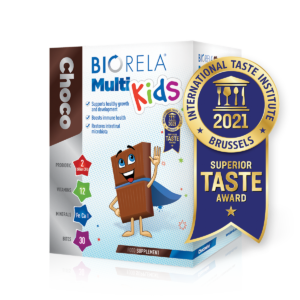 In a strong competition of more than several thousands of food products from more than 120 countries all over the world, Biorela® Choco Multi Kids was highly rated according to all five criteria: first impression, appearance, smell, taste and texture: all of which make up a pleasurable sensation for our palate. All the products were blind tasted to ensure an objective evaluation: jury members did not know what product they were tasting, who the manufacturer was nor what country the product comes from.   Therefore, only the best could be awarded!

Biorela® Choco Multi Kids, already recognized as the number one children’s multivitamin in Croatia* also became the unique food supplement in the region whose superior taste was recognized and awarded by the best European chefs.